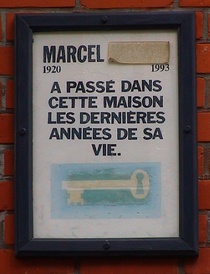 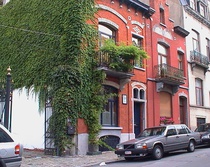 We originally found this plaque very puzzling but Jean-Michel Pochet gives us its history: A young Tunisian man bought the house and was then told by Christian Bussy (a TV and radio journalist, with a knowledge of the Surrealists) that the house had been the home of Marcel Mariën. The young man was impressed and made and erected the plaque, sending a picture to the person who had sold him the house, Mrs Sarah Whitfield. However she was not happy and demanded that the name be obscured. She is an art historian from London and had been left the house in Mariën's will, possibly with other items, since she has generously given about 20 of his art works to the Province of Hainaut. As we had suspected, the clever image on the plaque (a key with a keyhole in its handle) is indeed a clue to the identity of the subject - it is copied from one of Mariën's Surrealist works.

House of the Blind - Slope D