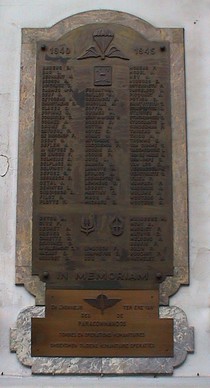 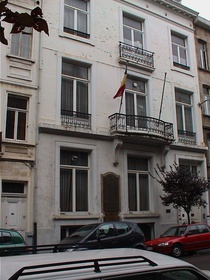 The original plaque did not actually explain who these fallen were. You can see that the bottom section, giving the text "In honour..." was a later addition. But this explanation only raises another question: what were the "humanitarian operations"? A pair of military insignia which, to the initiated, presumably specify the units in which these people fought surmounts each of the lists of names. To preserve this information we have specified for each commemorated person, in their details, either insignia A (the upper list) or insignia B (the lower list).

In 2014 we were contacted by Stephen Wood who had done some very useful research on this memorial.  We can do no better than copy in here what he sent to us:

Every day last week, I walked past the Home des Parachutistes at Rue de Chatelain, 46, on my way to and from work. I returned home (Washington, DC) yesterday, wanting to know more. I first found a webpage about the home on Brussels Remembers {this one}. The short discussion on that page about the home indicates little is known of the "humanitarian operations" in which these men participated. Wanting to know still more, I copied several names on the plaque and placed them in a single Google search. That search took me to Paracommando. That page, SAS Belgian Members, provides "Information taken from Jean Temmerman`s book 'De Belgische Parachutisten 1942-45'" The page indicates that 22 of the men were "killed." Almost all of those 22 men are also listed on the plaque at #46, mainly in the second list of 21 names. one of the comments (July 2013) below the list of SAS Belgian members says (according to Google translate) that the Temmerman book is no longer available but a copy is available for inspection at the library of the "Chatelain".

More about the names on the plaque at Rue de Chatelain: approximately half of the names in the first list on the plaque also appear in chapter 5 "Not Forgotten - A list of agents died on active service who are not recorded as SOE [Special Operations Executive] casualties in the records of the Commonwealth War Graves Commission" of the book "Unearthing Churchill's Secret Army - a List of SOE Casualties and Their Stories" by Martin Mace, much of it available at Unearthing Churchill's Secret Army.

The 5th Special Air Service or 5th SAS was an elite airborne unit during World War II, consisting entirely of Belgian volunteers. It saw action as part of the SAS Brigade in Normandy, Northern France, Belgium, the Netherlands and Germany.

House of the Blind - Low Wall I2