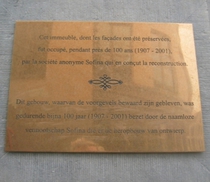 This building, whose facades have been preserved, was occupied for nearly 100 years (1907-2001) by Sofina, the company who planned the rebuilding.

In 1907, 9 years after being created, Sofina bought this building. During WWI, Académie Royale de Belgique was based here after being thrown out of Palais des Académies by the occupying forces. Between the wars there was a large high voltage laboratory here. In 1940 Sofina moved to Leopoldville but continued to use this building until 2001. Sofina then moved to Park Atrium, rue des Colonies where it undertook a large (19,000 sq.m.) development which it then leased to the EU. Called Mondrian, after the Dutch painter, this elegant building kept the old facades and added a contemporary part with an atrium. It is on the left corner, in rue du Champ de Mars. In March 2005 this won a prize for the Brussels firm of architects ASSAR (Eric Ysebrand) at Cannes MIPIM. It took Ixelles Commune many years to enforce the “urbanism charges” on the builder - 20 million € for private housing on the other sides of the square.

When we first visited this spot (in 2000-1) there was a very utilitarian plaq...

In this house on 20 July 1829 was born Jules Anspach, burgomaster of the town...