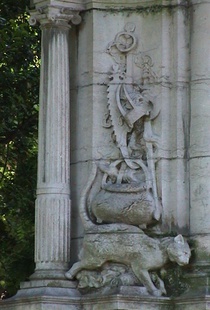 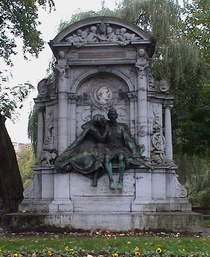 Mother Flanders! Who would dare to bury Ulenspiegel, your spirit, or Nele, your heart?
Charles de Coster, 1827 - 1879

This delightful monument was chosen as the featured memorial in July 2002 because of the cherubs, the owl, the cat, the cooking pot, the spinning wheel... Photographs cannot do it justice - it’s worth a visit. It’s also interesting since the female figure was modelled by someone not yet famous as a writer. Click on the "Creators" button at the left for her story.

The local history group has this to say about Charles de Coster: "He is the famous author of "...Ulenspiegel .." written in a superbly archaic language. He died a poor man at the corner of rue Mercelis and rue de l’Arbre Bénit, with Hector Denis, one of his faithful friends, at his bedside. He had been a French tutor at the Military School at the Cambre. On his way there he often paused at a bench at the side of the lakes, on the spot where this monument now stands."

The model for Nele, the female figure, was Neel Doff, who read the novel in order to understand the character for whom she posed.

Born in Buggenum, Holland. The third in a poor family of 9 children, she edu...

Originally, the text was only in French, the Flemmish translation is on a pla...

We need a historian to explain what the Belgian army of occupation did.

"Monument expressing British Gratitude to the Belgian Nation". Presented to ...

The monument shows Jenneval’s head and below, a female figure, Belgium, inscr...