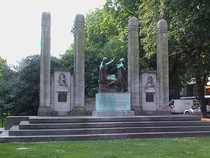 Rousseau did the central sculpture.

This is a monument incorporating 2 memorials. At the centre are two figures representing teacher and pupil, honouring the work done by both Demot and Buls in the field of education. The stone plinth to this central statue has the carved words "LA VILLE DE BRUXELLES A SES ANCIENS BOURGMESTRES CHARLES BULS ET EMILE DEMOT". These are almost exactly the same words that appear on the brass plaques under the busts (one in French, one in Flemish). More evidence of a project to "Flemishfy" the mainly French statues of Brussels, through the late addition of brass plaques.

Born Feluy-Arquennes. Probably his most frequently seen work is "Maturity", ...

Also at this site

In 1880 it was decided to move the fair from the Grand Place to boulevard du ...

Monument to the Regiments of the Line