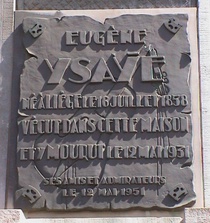 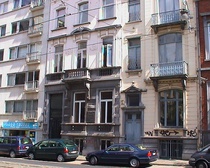 Chosen as a featured memorial in August 2002 because it is such an imaginative plaque. There aren’t many plaques where one would really like to know the sculptor but this is one. S/he has attempted something different. It may be difficult to see in the photograph (taken late in the day with the sun and the lettering casting long, confusing, shadows) but behind the lettering there is an incised violin with a broken neck and a violin bridge has been placed at each corner. All this on a pseudo-ancient manuscript with age-damaged edges. Not your average plaque.

House of the Blind - Garden S

It has actually taken two plaques to provide the relief head and the text in ...

Hospice at rue d’Accolay - I2