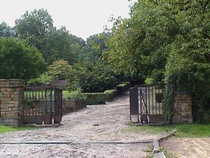 Plaque: The linking of Duden and Forest Parks

Forest Park, created by King Leopold II, and Duden Park, given by him to the nation, were linked in 1949 by the "royal donation".

Site: The linking of Duden and Forest Parks (1 memorial)

1190, square Laine, at the entrance to Duden Park

Leopold's cruel exploitation of the Congo was carried out in his name and und...

At a meeting on 30 March 1911 the commune council decided to name this square...

House of the Blind - Garden V

He also had his atelier (studio) here.

While preparing this entry we received Journal no.76 from 'Cercle d’Histoire ...