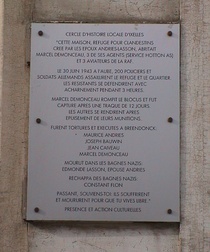 Credit for this entry to:
John Clinch

Ixelles Local History Society
This house, refuge for members of the underground, created by the married couple Andries-Lasson, sheltered Marcel Demonceau, 3 of his agents (Service Hotton As) and 3 RAF pilots.

30 June 1943 at dawn, 200 police and German soldiers attacked the refuge and the area. The members of the resistance fiercely defended themselves for 3 hours.

Marcel Demonceau broke through the blockade and was captured after a hunt lasting 12 days. The others surrendered when they ran out of ammunition.

As you pass, remind yourself: they suffered and died so that you can live free.

There were a total of 9 in the house but only 6 are accounted for. Are the missing 3 the RAF pilots who possibly survived as prisoners of war?

John Clinch writes: "My research shows that they were Flying Officer B. Cooper, Flight Sergeant E. Roede and Warrant Officer J.P. Egan. After the gunfight they were taken to St. Gilles Prison where they stayed for 15 days. They were then sent to a POW camp in Germany.
Earlier in the war the family who lived there had sheltered Welsh soldier Alfred Jones, but they were all arrested in 1941. See my website ." This is an excellent site on WW2 British prisoners of war in Belgium.

Caporal-Pompier, executed by the enemy.

When Anto-Carte arrived in Brussels he had this residential building construc...

Here lived Louis Neyts, sorter and postman, died for his country, shot by the...

We wish we could explain this to you but we can’t. There are some additional...